Please click on the tabs on the nav bar above to see all we have to offer. Neptune Press titles are now available on Kindle.

Here are a few selections offered by Foul Play Press:

How could this possibly happen?

When a convicted murderer, Billy O’Brien, serving two consecutive life sentences, is suddenly released from a maximum security prison due to a clerical error, a massive man-hunt ensues.

Not only are the BPD and Massachusetts State Police trying to find the escaped convict — but so are the FBI and the CIA — and the Mob — each for entirely different reasons. Chris Callahan is a retired Boston homicide detective, who also happens to be O’Brien’s childhood friend… and the officer who put him behind bars.
The entire law enforcement community agrees on only one thing:
Callahan is the only one who can bring him in…alive.

They had the perfect business plan. The investors ponied up the millions they needed. The company was humming along on all cylinders. And then one day they disappeared. Along with all their research, files and computers ... and a vial of the deadly Ebola virus that no one knew they had.
Enter Stephen Blackman, a fifty-something burned-out lawyer working his first case as a private investigator. Hired to try and find the missing scientists, Blackman turns up a dead body instead. And when the FBI arrives on the scene Blackman can’t be sure if they’re good guys or bad. But he’s caught up in this high-stakes, high-risk and highly confusing case to find the missing scientists before someone releases the deadly virus on an unsuspecting world. Blackman bounces against the worlds of international espionage, national politics, and high technology in the first of a series featuring a different kind of private eye.

"Simply stated, "Hot Tea...Cold Case" by D. G. Stern is a riveting mystery/suspense story that will seize and hold the reader's total attention from beginning to end. Superbly crafted twists and turns, all leading to an unexpected and climatic conclusion, "Hot Tea...Cold Case" is very highly recommended for mystery fan personal reading lists and will prove to be a popular addition to community library Mystery/Suspense collections." Midwest Book Review
To READ REVIEW  CLICK HERE


"An impressive debut from a talented new writer." ME Magazine
TO READ REVIEW  CLICK HERE

Spring in New York finds a group of seven friends struggling to reunite a year after college. There’s the beautiful, yet all-too-trusting Lana; David, the urbane womanizer; lost Aaron; Amanda, the ambitious opportunist; and Hunter, the troubled pariah. Telling their story is Will Harrison who, while trying to bring his friends together, begins to explore a future with his childhood sweetheart, Emily. Dingy subways, towering apartments, candlelit tables, white hospital rooms, and of course, Central Park, are just some of the destinations in this story of relationships – both strengthened and forgotten.

"The novel, a work of literary fiction, is the story of seven friends in New York City struggling to reconnect a year after graduating from college.

The narrator, Will Harrison, works to form, maintain and explore the relationship dynamics (both romantic and platonic) within his group of friends while also endeavoring to find an identity for himself in the unfamiliar world of post-grad life."  The Fordham Observer

Auto racing is a dangerous sport.  Everyone knows that.
Sometimes people are even killed-usually drivers...So the death of driver, Charles William Tyler Ill wasn't totally unexpected, except that he was stabbed in the back-in bed-in his motor home-at the Citrus Grove Raceway.
"D.G. captured every bit of the vintage world of racing world.  It's a vivid picture with believable personalities and great cars, and one "who dun it" that will keep you guessing to the very end.
Jeanette Veitenheimer Lime Rock Park Historic Festival Executive Administrator

"You have a great understanding of the characters that have passion for the sport and the cars that they race. I enjoyed the book immensely. Great story."
Stephen Page Founder, Chairman and CEO Vintage Racing League

"Stern's sense of dialog and breezy style as well as his occasional spot on observations of the vintage racing scene make for a tough book to put down," Vintage Sports Car
TO READ REVIEW CLICK HERE
AVAILABLE ON KINDLE

There is almost nothing quite as magnificent as a sunrise, standing
on the seventeenth tee at the Indian Whisper Golf Course, on
Little Loggerhead Island, off the coast of Savannah, Georgia.

By noon tomorrow the vista will radically change when the 35th
annual Concours d' Elegance at Loggerhead opens its doors to
about six hundred of the world's most glorious and glamorous
motor machines. But when a body is found in the trunk of a
beautiful red Mercedes everything comes apart and there's
Chaos at the Concours.

"Well-conceived and written. The Bentley Gang were in fine form. Many, many thanks for sharing your passion for all that is “collector cars” with me."
Stephen J. L. Page,Founder & CEO, Racing and Cars
"D. G. Stern masterfully shares with the reader the complicated inner workings of Ballard's thinking, revealing how he determined the motives for the murders and the evidence that led to a conclusion of what happened. It is obvious that Stern is a lover of vintage vehicles; he even has Ballard often residing in a vintage 1955 Airstream Flying Cloud travel trailer. Chaos at the Concours is fast-paced, exciting, and full of D. G. Stern’s red herrings.  If you like murder mysteries, you will appreciate Stern’s work."                                                                AuthorsReading.com 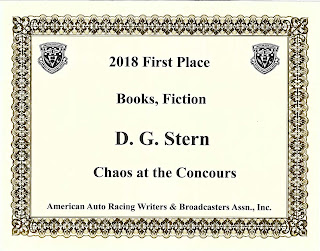 The fact that Cosmo Costello, a well-known Central Florida mobster, is killed doesn’t send seismic waves through the law enforcement community except when it is discovered that a rather significant amount of cocaine is missing

Full time automotive journalist and part time special deputy sheriff Thomas Ballard and his significant other, full time Orange County Florida Sheriff’s detective Olivia Nederfield get called into headquarters to identify Costello’s remains. The only apparent clue is a photograph dedicated to the deceased by an aspiring young stock car driver and a calendar with entries coinciding with car races in which he is racing, together with what appears to be payments of significant amounts of money

"Let's cut right to the chase, Stern's third Thomas Ballard novel, Panic in the Pits, is even better than his first two-and we loved the first two." Victory Lane 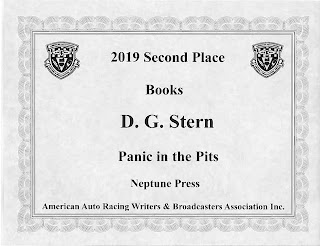 Many think that Formula One is the apogee of motor racing, although
a lot of NASCAR fans and drivers might disagree. The selection of the
Cedar Grove Raceway as host track for this year's event was a feather
in the cap of car racing in Central Florida.
When a member of the track owner's staff is found near the sweeping
right hander at the end of the back straightaway, the racing community
is shaken up because the cause of death was obviously the result of
the bullet hole in his chest.
"We expect to be reading Thomas Ballard's adventures for a very long time."
Vintage Sports Car

Foul Play Press will be releasing these following titles over the next few months:

Technically, twins are two children born about the same time from the same mother.  Twins are more common than you’d think–about once in every ninety births.  Twins can be either fraternal or identical.  The former develop when two separate eggs are fertilized at about the same time.  Identical twins are produced as the result of a single fertilized egg splitting in two. Each half develops as a separate fetus, but with identical genes.

There are several additional twin anomalies: including so-called mirror image twins, who are identical, but in reverse. Ryan was the yang to Sean’s ying.  Even though they were identical, they were opposite.  Ryan was right-handed, but Sean was left-handed.  Ryan was an excellent student-not so with Sean.  They were, however, inextricably bound together which is not surprising. There was nothing one wouldn’t do for the other.

McKenzie, Levitt, and Browne is one of the oldest, largest, and most diversified auction houses in the world. They sell everything from antiquities to mansions, from designer jewelry to corporate jets.
They also sell antique, vintage, and classic cars at their annual event
at the 2,000,000 square foot Orange County (Florida) Convention Center. Since Orlando is the home of Disneyworld, Universal Studios, and a myriad of other attractions, the Sheriff’s office is used to handling large crowds.

This year’s auction is being touted as the biggest assemblage of cars ever-over 5,000 vehicles are planned to be offered for sale. The logistics of moving over 70,000 spectators in, out and around the convention center is routine. Basically, this should be a very relaxing seven-day event for automobile journalist and special deputy, Thomas Ballard, but when a priceless Bugatti and its owner are missing, his plans change in a hurry.

A vacation is supposed to be relaxing-sun, sand and gentle zephyrs stirring, not stories of lost  luggage, rental cars without air conditioning and long lines at the best restaurants.


That’s what I had intended, but as with all things, that is not what happened. It’s called the Stephen Blackman curse.
While walking along the pier one beautiful August morning, admiring the gorgeous yachts and beautiful people, sipping a delicious cup of iced tea from Annie’s Café, Kristen and I notice an older man sitting in the “fighting chair” of a 50 foot something offshore fishing boat-obviously dead.

When is less-more? When you are investigating what seems like corporate intellectual property theft, and two very prime participants: the developer of the IP software and president of Surram Technologies; and its chief competitor and most likely culprit in the heist, each turn up dead.

Are the two deaths related or is the timing coincidental? Stephen Blackman does not believe in coincidences, however since each man was locked in vicious domestics disputes with spouses who each owned a significant share in the respective high-tech companies, outside forces may be at work. The fact that the decedents are siblings, also adds another dimension to the mystery.

There are simply too many people who would benefit from the demise of either or both men, including a disgruntled former employee of Surram, who claims the software was stolen from him. The investigation is further hampered by security issues relating to the application of the software to a critical defense program.

All the unravelling may lead to the conclusion that Humpty Dumpty may never be put back together again. 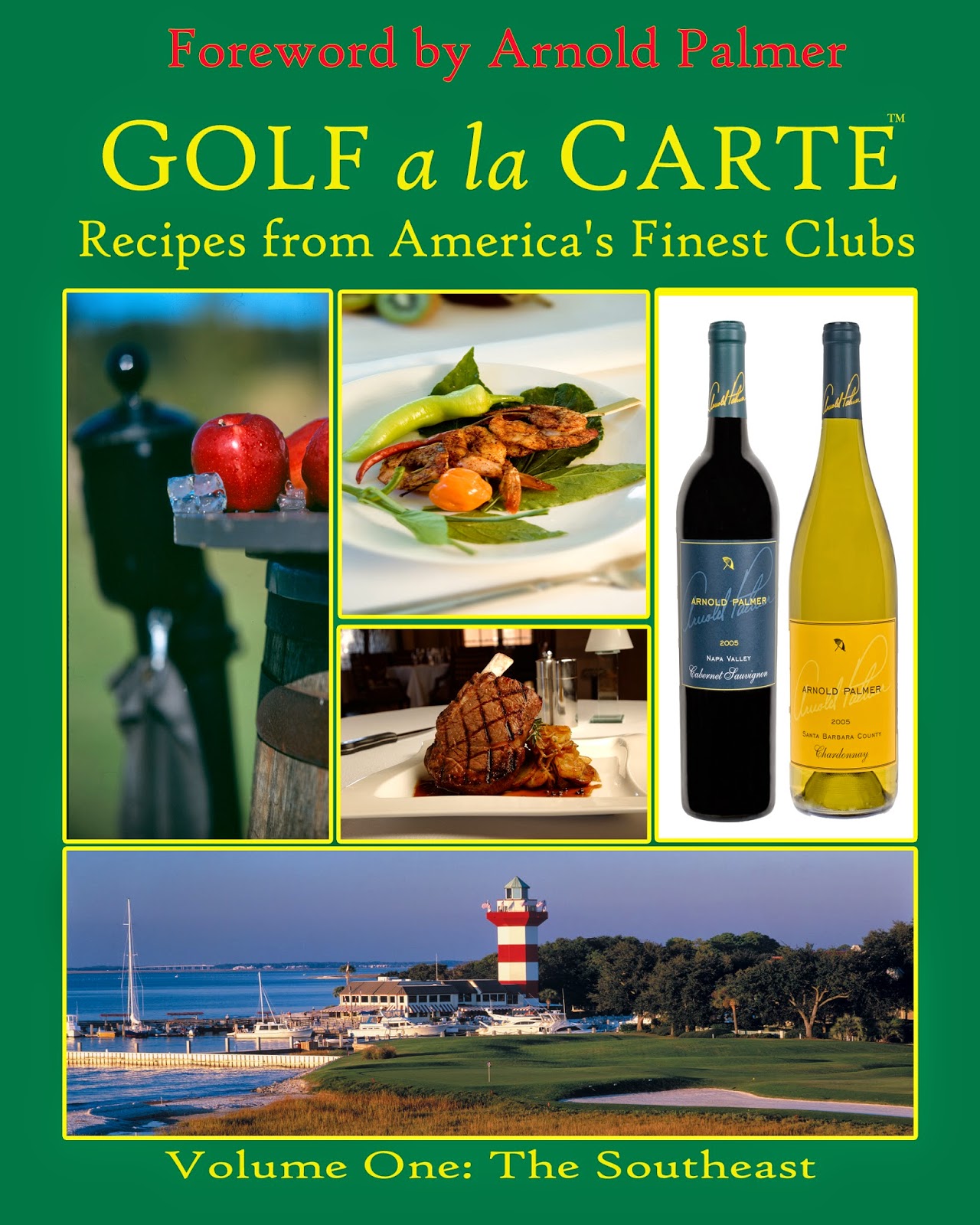 "This is a collector's item and the perfect gift for any avid golfer." Golf Central Magazine

"Entertaining golf buddies for the holidays? This holiday season you can check out ‘Recipes from America’s Finest Clubs'." Golfmedialibrary.com


If you want to contact us to arrange book signings or literacy events with any of our authors,
please contact us at events@neptunepress.org.